The great thing about this blog (and live music in general) is all the great people I've met through my musical adventures.  I've met tons of local musicians, sat down with many of the great venue owners in the area and jammed with countless folks who share my passion for live, local music.  So it was at a friend's holiday party/music jam a couple months back that I found myself in the living room, well after midnight, laughing, smiling and  belting out classic bluegrass and country songs at the top of my lungs with Kenny Kens.  Like so many of the people I meet, we traded Facebook info and went our separate ways.  In the ensuing months, I discovered Kenny was also aspiring band leader and tremendous singer/songwriter and started looking for an excuse to catch him out playing live.  This past weekend, I noticed he was playing with a "full country band" (the Brown Bottle boys) including--of course--a pedal steel guitar at O'Mara's.  This venue, a great Irish Pub, and even better restaurant is only 2 doors down from my old house in Berkley and is well known for providing excellent live entertainment.  I've seen some killer Irish bands there (hmmm...I need to remember to write one of those up).  Since I'd had a long week, and needed some revitalization, I grabbed my camera and set out for a night of live, local music.

Like so many others, my wife turned up her nose when I told her I was going out to see a country show.  Perhaps she was picturing what passes for commercial country  these days, with pretty boy Disney-pop and  "bro country" singers shaking their butts across pyrotechnical charged, multimedia enhanced stages shouting and rapping songs that only qualify as country because they use the word "truck" one and a while.  Or worse, the embroidered pant suit and string tie, designer cowboy boots, "live from Branson", He Haw Country parody acts springing up on YouTube and in malls near you.  I understand her reluctance...that stuff is tough to watch for me too.  However, I knew that Kenny was the exception, singing old county tunes the way they were intended--with passion, and soul, and respect for the traditions from which they arose.

On this night Kenny did not disappoint.  Playing before a small, but lively crowd of family and fans alike in the intimate settings offered by O'Mara's he presented a wide ranging and immaculately entertaining set of classic songs by guys named Lefty, Ernest, Hank and George and mixed in a few original songs to boot:  songs about the American experience; about love at it's best (and worst); songs about trains, and jails, and addictions; songs we all can care about and connect with.  The quintessential band leader, Kenny kept the show rolling--interacting as easily with the crowd as he did with the band, calling out the name of the song and the chords for the new guys and adjusting things on the fly to insure everyone was having a great time.  He had the perfect warm-yet-gritty baritone for these songs and blended effortlessly into killer harmonies when the Brown Bottle Boys chipped in on the chorus.

The Brown Bottle Boys add a little twist to the Country sound with a little modern edge.  Besides some killer baselines and harmonies, Steve Wyse upped the Rockabilly credibility with a truly unique and spectacular blue-glowing Doghouse Bass.  Guitarist Brian (Coogan?) was easily forgiven for the sin of playing twangy, county-blues licks on a Strat instead of a Tele, mostly because it sounded so damn good!  His guitar set up this night was perfect.  Loud enough to drive the band and dirty up the sound, yet lush and mellow enough for the vocals to stand on their own; driving, pulsing rhythm licks  spiced liberally with twangy, chicken-pickin' fills;  and high-energy leads with just a touch of Detroit rock-n-roll. Why the pedal steel guitar--with it's metalic flake paint and oodles of chrome--never caught on with the car guys in the Motor City is a mystery to me.  On this night, Kevin (Morris?) brought the country with his killer chops on the pedal steel.  Surprisingly, he also proved to be an exceptional keyboard player including a memorable lead break on Johnny B. Good during the second set.

Unfortunately, I didn't catch the names of the rest of the band.  The drummer for the night was perfect, playing a stripped down kit with brushes and a soft touch.  During a second set, a fiddle player joined the band and contributed some interesting melody work that perfectly complemented the country sound the band was putting down.  A friend of the band sat in on guitar for a couple songs and threw in some more modern rock/blues licks.  The night was turning into quite the party as the third set kicked off.

Unfortunately, the long week caught up to me and I had to bow out early.  As I was leaving, I saw a couple folks tuning up and some more instrument cases discretely peeking out from under the tables, so I imagine the night turned into a bit of a country throwdown, free-for-all (and if it did, I'll kick myself for months--I had the mandolin in the car....).  Feel free to share with your friends.   If you want more live, local music information, follow us at www.semibluegrass.com or on Facebook (www.facebook.com/semibluegrass) 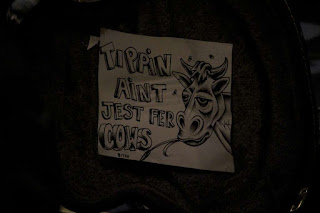 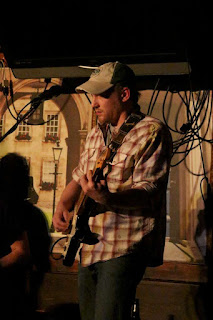 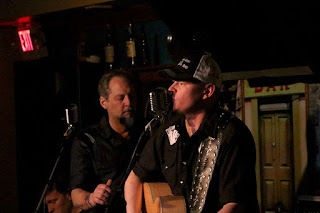 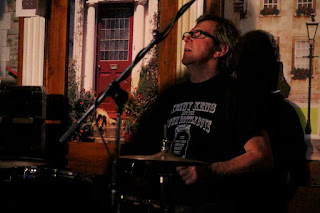 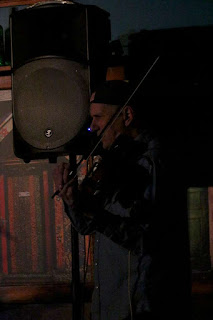 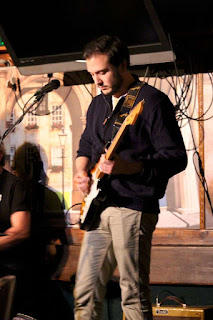 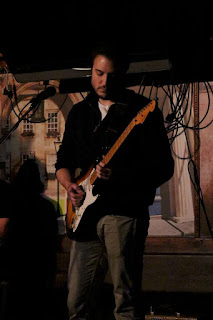 This past Saturday, with my wife and daughter out of town for the weekend, I went looking for some live, local music.  By happy coincidence, a couple of my old friends were playing with their new projects at the Elks' Club in Downtown Ferndale and I went to check it out.  For a variety of reasons, this impromptu outing turned into a truly memorable evening.  First, the usually "Members Only" Elks Club threw open their doors to the public for the evening and proved to be a class act from top to bottotm.  With very reasonable drink prices; fast, friendly and attentive service; and excellent attention to the sound and lighting, the Elks proved why they are one of the great venues in this already vibrant and welcoming nightlife mecca.  It's also rare to see two local bands play (mostly) original music and keep the crowd engaged for the entire evening--and these band surely did that! Lastly, the patently diverse and enthusiastic crowd at the Elks exemplified the ability for live music to bring people from vastly varied backgrounds together in these divisive times to have a good time with friends, old and new alike.

Opening the evening was fellow River Rat and Ann Arbor native Camila Ballario and her acoustic trio.  This talented young songstress presented a number of original songs and a handful of covers by bands probably more familiar to the millennial generation than old dudes like me.  The standout tune was her opener, the title track from her debut album "Another Good Mistake"--a tune that is really growing on me.  Ballario's clear, high voice is perfectly suited to the emotional and sorrow-twinged lyrics of the songs.  At times, she has a real "young Stevie Nicks" feel to her vocals.  She moves well on stage and signs with the confidence of a honky-tonk vetran, yet she is able to remain enticingly humble and authentic on stage.  While I am not normally a fan of these pop-rock, twenty-something songs, the quality of her performance, and the polished professionalism of her band makes them genuinely entertaining and listenable.  Obviously well-rehearsed, the instrumental arrangements shared by Bill Arnold on the Dobro and Andy Schiller on the guitar are rich and complex and perfectly suit the songs.  The pair take turns supporting the melodies and adding melodic fills to the songs creating a lush tapestry for Camila to paint with her soulful vocals.  While they only played a short 45-minute set, it is obvious that this up-and-coming vocallist is going to make her mark on the Southeast Michigan live, local music scene.

The night's headline act was Detroit folk-rocker Nikki Holland and the Dirty Elizabeths.  Perhaps no band leader I have met better exemplifies what it takes to find success in the Southeast Michigan Music scene.  She is personable and outgoing, taking the time to work the crowd and talk to everyone.  She has amazing stage presence and remembers to thank the bar, the band, and the staff as well as the audience--and it takes all of these to have a great evening.  The band pays attention to the sound mix, and you can hear each part clearly throughout the room--and they play at a volume that is loud enough to carry, but quiet enough to comfortably hold down a conversation, even near the front of the stage.  Rare these days, she was willing to share the show with an opening act, and even had Camila and Bill up on stage for a song during her set.   Most importantly, she is the master of branding herself with a ton of merchandise available--from free stickers, to CDs and a variety of tee-shirts (and...rare these days...in a variety of sizes form XS-3XL).  She literally has "something for everyone".  On stage, she mixed outstanding original folk-rock songs with just the right number of memorable and easily recognizable cover tunes to keep the crowd on their feet and on the dance floor.  It is impossible NOT to have a good time at a Nikki Holland show.

Nikki is a master showman on stage--as comfortable belting out high-energy vocals as she is interacting with the crowd between songs (and always with a genuinely warm smile on her face).  And what a band this singer-songwriter brings with her.  My old friend Andy holds down the guitar duties and is as comfortable playing electric blues, southern slide and even acoustic guitar depending on the mood of the song.  Holland laughingly refers to him as "Andy Garcia"; a not-so-subtle poke at his love for all things Jerry Garcia.  And, in the tradition of all truly great nicknames, I hope this sticks as his "permanent" stage name as I couldn't imagine a better moniker to live with for the rest of your stage life.   Apparently the bass player was fairly new (I didn't catch his name).  However, he really added some texture to the band, transitioning effortlessly from a country I-V rhythm, to funk bass, blues walks and even some electric organ sounds to color his tone.  Holding court on the kit was Brian "BC" Cox, a true master of percussion dynamics.  I love that he plays a fairly simple kit and can resist the rock-drummer impulse that ruins so many live shows.  He's also added a killer cowbell rhythm to a couple of songs that was perfect for the glass-and-brick walls of the venue.  A highlight of the evening was the closing number where each member of the band took a short solo...until BC's turn came.  Moving effortlessly from snare to toms to cowbell to cymbals, BC rose to his feet and kept the rhythm going as he played his way across the stage, up the mic stands, down the dance floor and onto the beer bottles and table tops in the crowd.  It was a real show-stopper and the crowd loved it.  I hope he keeps "playing the bar" in his repertoire for upcoming shows.

Overall, the Ferndale Elks club is to be commended for putting on a truly memorable and entertaining night of live, local music.  Keep an eye out for Camila Ballario and Nikki Holland & the Dirty Elizabeths coming soon to a venue near you.  Since pictures speak a 1000 words, I've posted a collection of shots from the evening below.  Feel free to tag, download, share freely--just give credit to SemiBluegrass.com and/or like us on Facebook.  Note:  These pictures are sized/compressed for the web.  If you would like the full-resolution originals, please email at semibluegrass@gmail.com.  See you all out there! 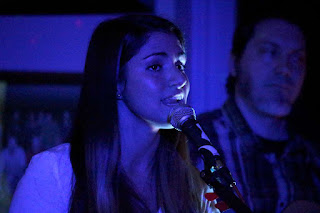 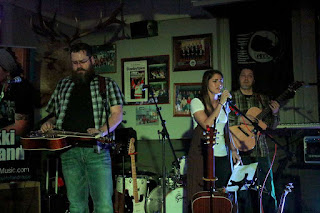 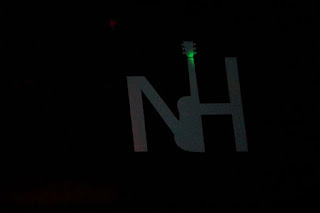 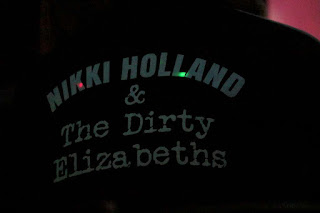 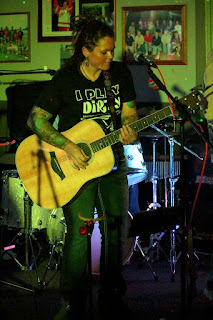 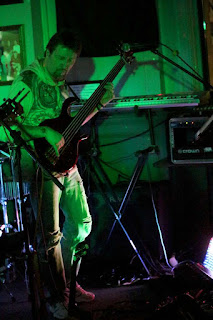 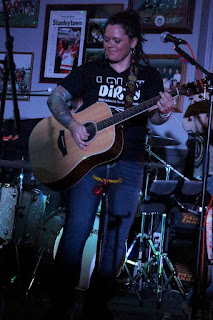 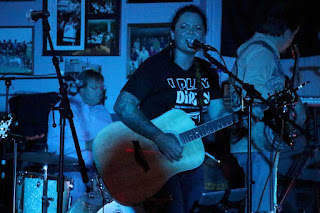 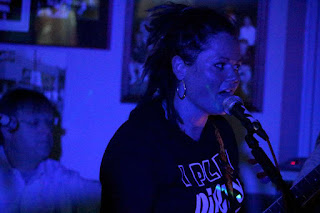 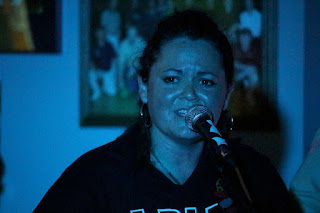 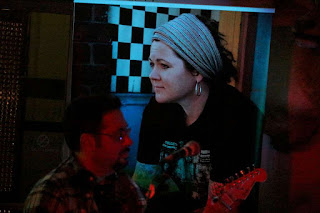 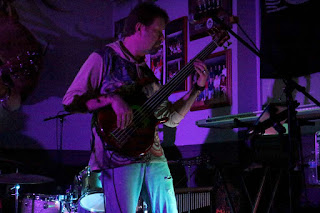 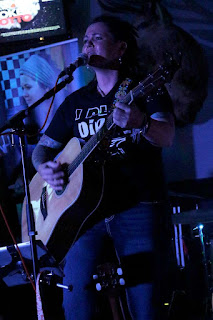 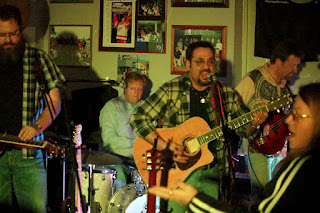 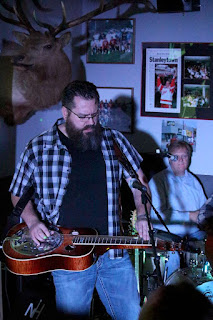 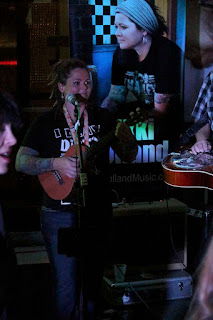 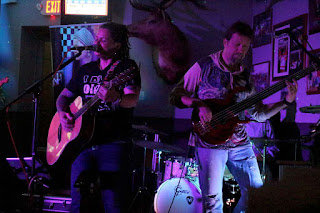 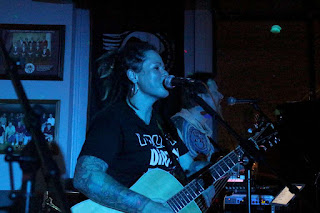 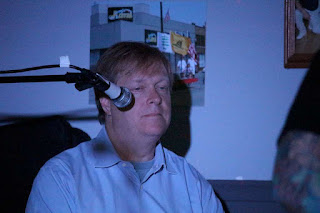