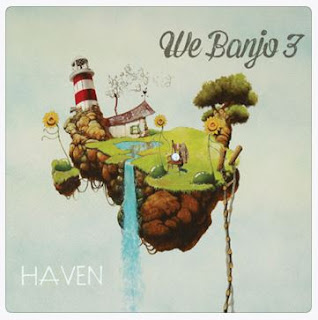 It will come as no surprise that one of my favorite "semibluegrass" bands is We Banjo 3.  I try to catch them (front row) at The Ark in Ann Arbor every time the play.  I had the pleasure of seeing them live in a "festival" setting at ROMP this year in Owensboro, Kentucky.  Their set there electrified the crowd and may have been, in the midst of an all-star lineup, the best set of the weekend.  It was certainly the most high-energy and crowd-engaging performance that I've seen during this incredible summer of live music.  Like all the best bands do, the brothers (Howley and Scahill -- 2 sets) in the band, spent a ton of time after the show shaking hands and hanging out with their fans.  After talking to them for a bit they let me know they were setting up more tour dates including a visit to Southeast Michigan the winter (late February of early March).  I mentioned that my SeMiBluegrass and Southeast Michigan Bluegrass Music Associations friends would likely make up a huge part of their crowd  and they immediately volunteered to send me an advance copy of their new Album Haven, set to drop on July 27th.  It arrived last week and I've pretty much played nothing since.  Like the band, it is hard to pigeonhole, but offers high quality, timeless, well-crafted and endlessly engaging listening.  Here's some of my listening notes to date.


The album starts with the title track Haven; a light, bouncy tune with a sweet melody featuring the killer mandolin licks and fills of Martin Howley.  I hate to call it a love song, but rather a celebration of the meaning of relationships and companionship..."let me be your Haven, let me be your love...".  The song is richly complemented by the subtle addition of an upright bass. For those that have seen the band live, you will recognize that they usually add the "bass" part with the top-string of David Howley's "DADGad" rhythm guitar and the subtle contribution of Fergal Skahill on the Porchboard Stompbox. There's even some tasty horn section licks on this song (and a couple others).    Light in the Sky, an upbeat, driving song about a girl keeps the energy going and features some of the best vocal harmonies on the album with a clean, clear tone that keeps the song's mood light and airy.   Don't Let Me Down pulls off the "sad song with a happy theme" trick masterfully and features what I can only describe as "Irish Mountain Music" banjo accompaniment.

Like all of their self-described "Celtgrass" albums, Haven celebrates the instrumental prowess of the band with four pure instrumental tunes.  Sugar House is a classically structured fiddle tune that allows David Howley to depart from his usual killer rhythm licks and fully explore the melody on the guitar.  The banjo on this tune is either played 3-finger, "Scruggs Style", or--more likely--played in some weird crosspicking/plectrum style with such skill that it is indistinguishable.  Annabelle's Cannon sounds exactly like an Irish band playing bluegrass  music (or is it a bluegrass band playing Irish music?).  Marry Me Monday shows off Fergal's utter mastery of melody, tone and phrasing.  The final instrumental tune, Dawn Breaks is masterpiece of arrangement, with a lilting and uplifting melody that allows each band member to shine, and--with the addition of a Bodhran half way through (Fergal?) the song--already uptempo and high energy--kicks in the afterburner and rips through the final passages to a thunderous ending.  A great, fun ride!

As mentioned above, the remaining songs on the album reflect on the nature of relationships.  All feature David Howley's clear, powerful voice, 3- and 4- part harmonies and killer instrumental fills.  My favorite right now is War of Love--a "falling in love" duet that features an incredible vocal performance by Sierra Hull, whose voice complements Davids so thoroughly that they sound like a single voice.  A close second is Sunflower a stripped down, hook-driven almost Pop ballad that is somehow impossible to get out of your mind.  Speaking of hooks--lyrical and instrumental--Pack It Up will get in your head and rattle around for DAYS.  Really a "catchy" tune in all the best ways.  Overall, Haven is a well crafted, cohesive and eminently enjoyable journey, perfect for summer listening--it even made mowing my stupid lawn semi-enjoyable!  If you only buy one "semibluegrass" album this summer...make it this one.  And go see these guys live--couldn't even start to describe how enjoyable that is if I had a million more words....
Posted by John P. Bayerl, PhD at 1:08:00 PM